Hi everyone! I use the Google Data Studio (GDS) a lot to create dashboards to be able to communicate with data.

GDS has several “connectors” (Google Data Studio Connect to Data) to make it possible to feed GDS with data.

I know I can download GRIST tables and, for instance, upload to Google Spreadsheet to feed GDS. However, it would be wonderful to have a native “connector” at GRIST to do so. Is it possible with GRIST API? I didn’t try the GRIST’s API yet…

I took a look at what’s available. I found a connector called “API Bridge - JSON” by “Two Minute Reports”, which looks like it should allow fetching data from Grist via API. It would require you to give it your Grist API key, and configure to extract data in just the right way. My brief attempt wasn’t enough to configure it correctly to get any data, and I don’t know how safe it is to give it you sensitive credentials like your Grist API key. Exporting to CSV and using the “File Upload” connector seems simpler and safer.

As for creating a native connector, I looked at what it would take to create a Community Connector. It’s definitely possible, just requires some work.

) button to upvote it. This would help us prioritize building one.

(I’ll mention that a motivated user could get one built without waiting, since it doesn’t require any changes to Grist itself, only some coding in Google Apps Script.)

The ability to share the data with outside sources and not give them a window into the word of the data would be very helpful.

n8n.io get GRIST on the flow! 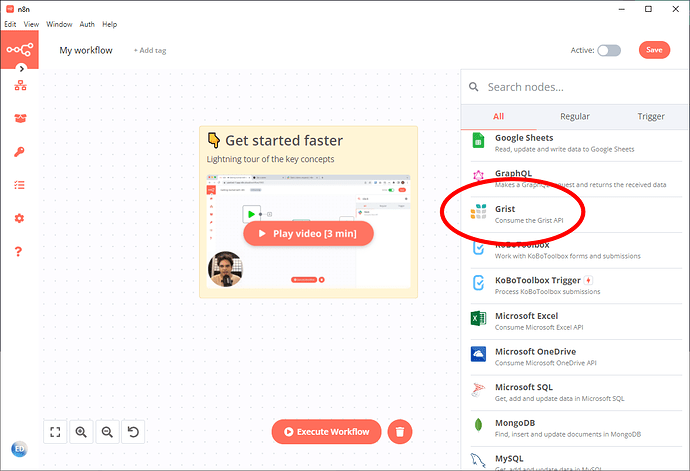 I use the Grist node in n8n for several months¹ and I can canfirm it works very well. It would be fantastic to have a Grist trigger node!