First of all congratulations for this great project. 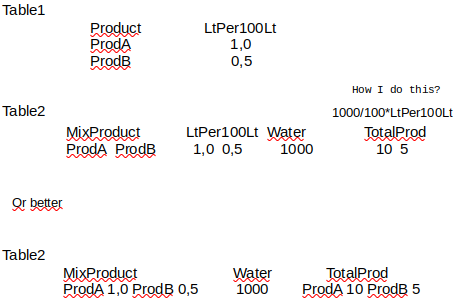 Hi there and welcome to the Community!

I made an example at the link below using the data from your screenshot:

Table 1 lists the products and Lt per 100 Lt

Table 2 shows the Mix Product (Reference List to the Product column in Table 1).

Total Prod column is a formula column. I was able to get this in the format of Prod A 10 Prod B 5.

Let me know if you have any questions!

Thank you for your help, have a nice day.
Regards, A.S.

Hi,
another question on this same topic, how can I put ROUND(x, 2)
Thanks

I’ve updated the example document with a new column that shows the use of ROUND in the Total Prod answer.

The formula in the Rounded Value column is:

Then, the join formula must be updated to include the rounded values from round_x instead of x.
’ ‘.join(’{} {}’.format(first, second) for first, second in zip(l, round_x))

In the screenshot below, you’ll see the original ‘Total Prod’ column and the new Rounded Value column. I changed the values for Lt per 100 Lt so you could see the difference. When the value is an integer like it was previously (10.0 and 5.0), it will only show a single decimal even if you have 2, 3, etc listed as the round-to value.

Hi,
another question on this same topic, how can I sum(TABLE2.lookupRecords(Product=$id).Total Prod)
Thanks

I have updated our example, linked below.

I added a new column in Table1 that sums the Total Prod values from Table2 for each product.

The formula used here is:

First line of our formula finds all records in Table2 that contain the ID of the current row in Table 1. We assign this list of records to the variable water_values. In line two, we convert each item in the list to a float value.

Next , we convert the value in the LT per 100 Lt column to a float.

Last, we find a sum of all of the values.

Let me know if you have any questions!

Hi, thank, have a nice day.